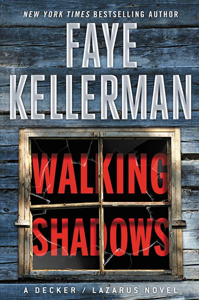 Detective Peter Decker and his wife, Rina Lazarus, risk life and limb to solve a pair of brutal murders that may be tied to a crime from more than twenty years ago in this intense and addictive mystery from New York Times bestselling author Faye Kellerman

On a gorgeous early summer morning in the small upstate college town of Greenbury, New York, Peter Decker is called to investigate some vandalized mailboxes on a rural street. Searching for evidence of adolescent mischief in the leafy woodlands adjacent to an empty vacation home, he discovers the body, dead from a blow to the back of the head.

The victim is identified as twenty-six-year-old Brady Neil, a resident of the neighboring town of Hamilton. Brady had no criminal record, few friends, worked full-time, and attended community college. But Decker soon learns that the young man has past links to a brutal crime. When Brady was a boy, his father, Brandon Gratz, was convicted of robbing and killing the owners of a local jewelry store. While Gratz and his partner, Kyle Masterson, admitted to the robbery, they swore they left the owners, Glen and Lydia Levine, alive. There was only one witness—the couple’s son, Gregg—and his testimony put the criminals away.

A cop for thirty-five years, Decker knows there’s more to this new homicide case than the records show. To dig deeper though, he needs the Hamilton PD’s cooperation to access their files. In return for their help, Decker must take on a temporary new partner, Hamilton PD cop Lenora Baccus—who happens to be the Hamilton police chief’s daughter. Is Lenora a young detective eager to learn from an experienced mentor or a spy reporting back on every step of the investigation? Decker can’t be sure about her motives, especially since the Levines’ murder case was the break-out case for Lenora’s father, Victor Baccus.

Decker suspects that Brady Neil’s death may be connected to his father’s sins, especially when one of Brady’s friends, a coworker named Joseph Boch—aka Boxer—goes missing and his home is the scene of a gruesome bloodbath. Sometimes a crime has too few clues. This one has too many. And the mystery is only deepening.

Who would savagely kill two young men – and why? Are the cases from the past and present connected? Finding answers will require all of Decker’s skill and knowledge, the help of his fellow Greenbury detectives Tyler McAdams, and Kevin Butterfield, and information gleaned from his wife Rina’s behind-the-scenes investigation. Together, they slowly begin to assemble the pieces of this deadly puzzle . . . and see justice done.

“In a class with the most literate, facile, and engaging writers in the business.” —Associated Press

“Reading a good thriller is very much like taking a great vacation: half the fun is getting there. Faye Kellerman is one heck of a tour guide.” —Detroit Free-Press

“Kellerman does for the American cop what P. D. James has done for the British mystery, lifting it beyond its genre.” —Richmond Times-Dispatch