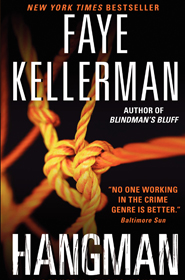 High school senior Chris Whitman confessed to murdering his girlfriend to spare beautiful, vulnerable Terry McLaughlin from having to testify at his trial. Years later, when the truth set Chris free, he married Terry, changed his name to Donatti . . . and became a professional killer. Now Terry’s missing, Donatti’s disappeared—and their teenage son, Gabe, has no one to turn to except his mother’s friend, LAPD Detective Peter Decker, and Decker’s wife, Rina Lazarus.

The last thing Decker wants is Terry’s sociopathic husband back in his world. And the hunt for Terry must share center stage with another case when a young nurse’s body is found hanging from the rafters at a construction site. Caught between two troubling investigations and an increasingly precarious home life, Decker and Rina must make a difficult decision about sheltering Terry’s son . . . even as the shadow of a serial killer falls across their own imperiled family.